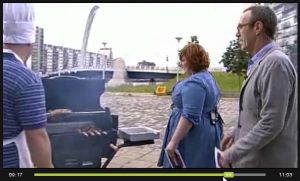 Tips for those wanting to succeed in

Entrepreneur Ed Wray on succeeding in the den

Entrepreneur Ed Wray on his Time in

It is part of every entrepreneurs dream to have their product or service featured on Dragons’ Den. With BBC audiences of around five million and endless repeats on Dave, the programme offers an instant marketing solution for new businesses with the opportunity of a cash injection and business advice from the experienced Dragons themselves.

Ed Wray, designer of the BarbeSkew, the most innovative BBQ on the market, started his company in 2007 and was featured on Dragons’ Den in 2008 and on Dragons on Tour in 2009. Ed was spotted by the Dragons’ Den production team when he was talking at the British Library about how he set up his business in early 2008. The production team chased Ed and asked him to post his application form to a “special email address” where it would get “priority consideration”.

What followed was a one hour phone interview followed by practice pitches at the BBC TV Centre and ultimately the final invite to Pinewood Studios for the actual filming. Around 10 contestants are invited to a days filming and every effort is made to keep the contestants well away from the Dragons so no contact is made before the show. Filming of each of the 10 contestants climbing a set of (fake) stairs take place and then each contestant waits for their turn to be called.

It quickly becomes apparent that some contestants have been through the whole process before and have waited in the Green Room all day without being called due to time running out. Small bite size filming takes place whilst waiting providing the BBC with clips for their website.

Finally you get called. You walk through the maze of Pinewood Studios (trying to spot James Bond) and then wait at the bottom of the stairs with your heart pounding …..

This is a great video to help you choose your barbecue. We love the fact that Phillip Schofield already has a rotisserie barbecue given to him by Jamie Oliver.

It was also interesting to hear that Gino said it would cook the food the best because of the rotisserie.

We were the only British company – Landmann is German, Cadac is South African, Outback is Chinese owned and ProBBQ is American.

One of our customers said “I’m surprised they marked it down a sausage because of the assembly ….. I really enjoyed putting it together”. And don’t forget of course we’re always available to help you through the assembly on the phone although the quality of the written instructions is excellent.

Jason gets all hot and bothered whilst testing the biggest and best high-tech BBQ’s with top chef Simon Rimmer.

We agree with Phillip Schofield (See the BarbeSkew reviewed on “This Morning”) that the Landmann Geos Suspended Grill (German) is dangerous in windy conditions especially as you have to turn the food manually (quite hazardous).

The Cadac Leisure Chef (South African) is aimed more at the caravan market – it’s great to fry your bacon and eggs and is also small enough to store in your caravan. Once again we agree with Phillip Schofield that whilst it’s convenient, it does take away the whole “barbecue experience”.

The ProQ (USA) Frontier Smoker is a specialist bbq and it allows food to be smoked or steamed and is aimed at the specialist barbecuer who may have 3 or 4 barbecues in their back garden.

The Grand Hall T Grill (USA) gas bbq is a beautiful looking barbecue. There’s not many gadgets on this grill meaning it loses out on its functionality. But for £1000 you do get a very good looking barbecue.

The Weber Summit S650 is the pinnacle of outdoor grilling. In fact when Ed becomes a millionaire he’s going to buy one! The integrated sear (burn) station is a fairly new feature on gas barbecues that browns the outside of the food. We have heard a few comments from people in the last year that warn about the use of the sear station burning food on the outside whilst not being fully cooked in the middle. The Summit £2,500 S650 has actually been discontinued and has been replaced by the £3,000 Summit S670. What’s £500 between friends? Oh it’s the price of the top-of-the-range Gas BarbeSkew. No wonder we’re getting so many Weber converts that loved their Weber but prefer the BarbeSkew!